The purpose of the project is to improve overall safety, drainage, and pavement condition. Two projects were originally devised to accomplish these improvements. One sought to reconstruct SR 42 to improve the pavement condition, improve sight distance and geometries of the intersections with Hunt and Chamberlain Roads. Separately, a project was created to realign the intersection of Swalls Road with SR 42 to improve both safety and capacity. During the project development for both, IEI recommended that combining the projects would lower the cost for design and construction by taking advantage of the economies of scale. Additionally, a layer of coordination could be removed since both projects would be designed by the same fi the same contractor
resulting in an accelerated overall schedule.

IEI’s role in the SR 42 & Swalls Road Reconstruction Project was to prepare contract plans and specifications along with obtaining project related permits for roadway resurfacing and site rehabilitation. IEI was the prime consultant in charge of the project from startup to closeout.

The single project dubbed the “SR 42 Pavement Replacement & SR 42 and Swalls Road Intersection Improvement” was funded through the Major Moves initiative and was originally anticipated to cost twelve million dollars. The project included 2.5 miles of reconstructed and realigned pavement on SR 42, a bridge, and numerous pipe culverts. The pavement design was anticipated to accommodate high amounts of truck traffic since the corridor is on both the National Truck Network and the STRAHNET Defense Highway Network.

While progressing to Stage 3 submittal for an anticipated Fall of 2012 letting, it became necessary for the project team to pivot to adjust to outside factors affecting the scope of the project. Three significant design elements were incorporated into the project. First, the obligated budget for the project was reduced by 30%. Second, the realigned intersection of SR 42 and Swalls Road was to be redesigned as a roundabout instead of a three-way stop controlled intersection. Lastly, the team was to coordinate with the Terre Haute Airport Authority, the Air National Guard, and the Indiana Army National Guard to realign SR 2 which serves as the primary access point for the National Guard’s base on the airport. 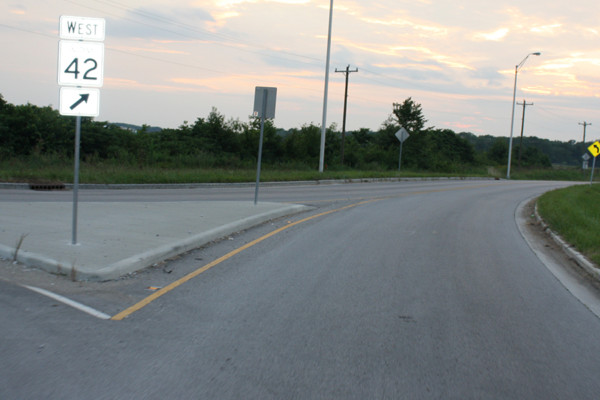