Maike’s diversified experience and leadership style has already brought him success in leading the design of many critical infrastructure projects for our clients in the New York Area including Port Authorities of New York and New Jersey (PANYNJ), New York City Department of Design and Construction (NYCDDC), Metropolitan Transportation Authority (MTA), and New York City Economic Development Corporation (NYCEDC). He has worked on some of the highest profile and critical infrastructure projects in the Northeast including The Bayonne Bridge Navigational Clearance, Goethals Bridge Replacement, The World Trade Center Redevelopment, and Atlantic Yards/Pacific Park Redevelopment. Maike brings over 15 years of design and construction experience and is a license engineer in New York and New Jersey.

The firm’s goal is to create sustainable infrastructure necessary to build and connect communities, improve quality of life and encourage economic development. IEI is a DBE/MBE certified firm.

For the last several years, IEI has lived up to the firm’s ideal of enriching the communities in which we work by supporting The Greater Harlem Chamber of Commerce, The West Harlem Development Corporation’s Toy Giveaway/Community Celebration, and the MLKDC Toy Giveaway in Harlem.

IEI was met with rapid success in New York with several wins, including multiple contracts with: 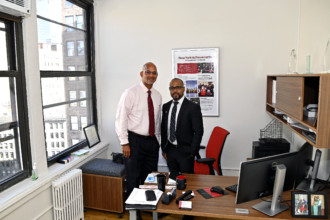